This scholarship honors the parents of Gary Greer (1983 B.S., 1986 MBA). Scholarships are to be awarded annually to sophomore, junior, senior, or graduate students in the College of Business “who exemplify the Joy of The Lord and other characteristics and traits held dear by Mr. and Mrs. Greer.”

Jack Greer was an assistant professor in the ORU College of Business for more than 11 years. He taught Financial Management and Quantitative Analysis. In his pre-ORU days, he was career military: an Air Force navigator who served during the Vietnam War. By the time he retired from the service, he had achieved the rank of Lt. Colonel. He was also involved with the Full Gospel Business Men’s Fellowship International, as well as in prison ministry and feeding the poor. After his untimely death in October 1996, he was praised by a colleague in the department, Dr. George Gillen, who said Greer was “an outstanding Christian educator who believed in academic excellence” and “a wonderful role model—but he was also a tough teacher.” (Details drawn from the Oct. 7, 1996 issue of The Oracle, ORU’s student newspaper.) Greer earned a B.S. degree in 1956 and an MBA in 1965, both from the University of Oklahoma.

Gary Greer says his father was a man of strong character and integrity who was bold in sharing his faith in Christ with others, and a man who placed a high premium on punctuality. His magnetic smile lit up any room he entered and warmed the hearts of those in it. His smile was direct evidence of “the Joy of The Lord” being in his own heart.

Carol (Law) Greer grew up in Des Moines, Iowa, moved to California after her high school graduation, and met her future husband in Hawaii while she was on a cruise. She and Jack Greer were married in 1960. Carol was a homemaker who devoted herself to her husband and two children, Gary and Lynn. She was also a student of the Bible and a prayer warrior. After Jack retired from the Air Force, he and Carol enjoyed returning to some of the cities where his military service had taken him. When Jack took a teaching job at ORU, Carol spent time working for some doctors at the City of Faith, and then as a prayer partner for the Oral Roberts Ministries. She loved being with her children, grandchildren, and great-grandchildren, and kept in close touch with her best friends. Her son Gary described her as “my rock.” Her best friends described her as an authority on scripture relevant to just about any situation. She studied God’s Word and showed herself approved.

This scholarship was established to invest in promising young lives and to teach them to encourage others to worship the Lord and enrich their lives through the gift of music. It is intended for students in vocal music education, with a preference for women.

Jan Herrman Eisenberg (’76) served as Assistant Director of the University Chorale, and received her vocal music education degree from ORU. She sang in church choirs, and led a singing group that visited prisons, malls, and nursing homes. Later, she directed church musical programs, served on a worship team, played the keyboard, and sang solos. Jan and her husband, Don (’74), had three children, and ultimately four grandchildren.

For Annette Herrman, Jan’s mom, music was a significant part of her life as well, as she sang in her church choir for most of her life and played piano and organ.

The Frances and Victor Skaggs Scholarship

In memory of H.V. and Mary Frances Carder Skaggs

Support for: a Quest recipient from West Virginia

Victor and Mary Skaggs were West Virginia natives for whom education was vitally important. They were children of the Great Depression—their families very poor but hard-working and devoted to the Lord. Victor earned his B.S. degrees at West Virginia Institute of Technology and served as a U.S. Navy officer during World War II. Frances earned a B.A from West Virginia University. After the war, Victor earned his M.A. at WVU in Speech and embarked on a long career in radio and television broadcasting. Frances was a homemaker who, after raising four children, worked in the travel industry. Their daughter, Lynn Skaggs Davis, graduated from ORU in 1977.

Vida Mae DeLoach was born July 12, 1933, in Saluda, South Carolina, at a time when women were not independent. As a single woman and devout Christian, she carved out a good life for herself. She believed in family, hard work, education, exercise, helping others, and the Lord.

After retiring from 30 years of service at Greenwood Mills in Greenwood, South Carolina, Ms. DeLoach graduated from a local beauty college and opened a beauty salon. There she shared the gospel with her clients and friends.

Ms. DeLoach always had a smile on her face and the love of Christ in her heart, as well as a helping hand and/or a kind word. She was a woman with a true Christian heart.

This was her favorite poem:

But this I ask O God!

In this vain world where sin and sorrow dwell, where toils and cares disappoint and break men’s hearts, and Satan’s darts are hurled.

I do not ask that all go well with me, that I have no scars that tell of wounds from battles fought or disguised Satan’s fierce onslaught.

But this I ask in all sincerity: Let me forever dwell in Thee, Dear Lord. In all life’s tasks, reveal through me thy purity, thy steadfast amid the stormy blasts. Thy courage to endure throughout eternity: O Christ, to be like thee.

Auguste Elise Johnson was born in Kitzingen, Germany, on Feb. 28, 1928. She was the eldest of nine children and helped to raise and nurture her siblings. The skills she learned in high school and trade school (sewing, knitting, crocheting, cooking, baking, etc.) prepared her for her role in life as a loving and giving homemaker. After her first husband, Eduard H. Renner, passed away, she worked diligently for many years, providing for her children. Later, she met and fell in love with Leroy Johnson, who served in the U.S. Army, and realized her dream of living in the United States.

On Dec. 9, 2018, as her family prayed and worshiped the Lord Jesus, thanking Him for her life, Auguste was ushered into His glorious presence. Her family and loved ones were reminded of how much they loved her and how much Jesus, the one who matters most, loved her.

Dr. Frank and Peggy Romanelli retired as full professors of Business from a university 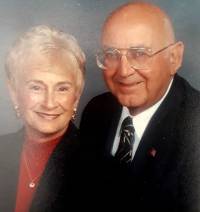 in Ohio. They were at Oral Roberts University from 1981 to 1990; Frank had served as the dean of the School of Business and Peggy was a faculty member in the Business Department.

In addition, Frank founded three hotel/restaurant management schools in Texas and is a Certified Hotel Administrator with many years of hospitality business management experience.

Involved in Christian teaching and counseling for many years, the Romanellis traveled and ministered frequently as opportunities were presented. Frank and Peggy were married for almost 60 years and traveled to 43 countries.

The Clifford and Mary A. Frasier Global Leaders Scholarship

This scholarship honors the parents of Ernie Frasier (1979 MBA). Scholarships are awarded annually to undergraduate students in the College of Business with majors in Finance, Entrepreneurship, or International Business. Students must maintain a GPA of 3.0 or higher.