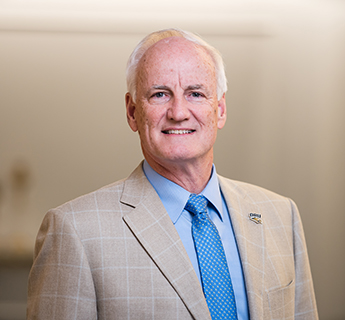 Mark was CEO of three different FAA training centers, including Higher Power Aviation where he served for twenty years as co-founder and owner. His trainees have flown every US President from Reagan to Trump, and “Air Force One” head of state aircraft from four continents. Graduates fly for countless airlines, corporations, and military services worldwide. With 3,500 of his Boeing 737 graduates alone hired by Southwest Airlines (the largest B737 airline in the world), Mark has influenced one of the greatest airlines in history.

Many organizations have benefited from Mark's volunteer or board director service, including DFW Airport Interfaith Chaplaincy, Mastermedia (a ministry to Hollywood and New York media), Camp Barnabas, Miracle League, ORU Alumni Board, and Rotary Club.

Mark follows all ORU sports and enjoys travel, connecting with new and old friends, and pursuing his passion of ministry in business.