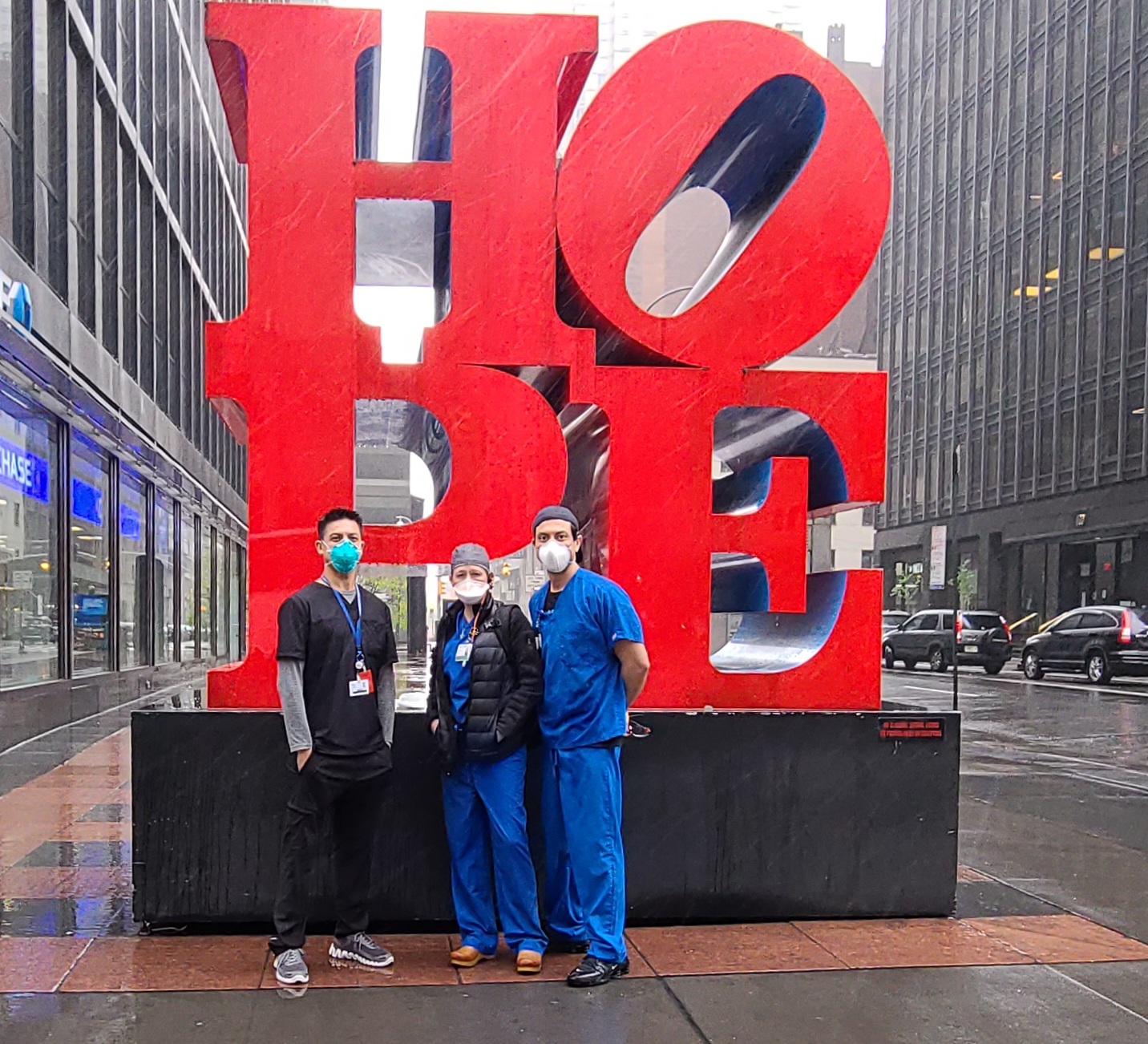 When Christianity was still in its infancy, a plague swept through ancient Rome. The wealthy fled to country homes while the impoverished shunned the sick. And the Christians? They stayed in order to nurse those who were ill, to provide care and perhaps bring healing.

This mentality among Christians lives on today, especially among graduates of ORU’s Anna Vaughn College of Nursing.

“We felt like it wasn’t something we could say ‘no’ to,” said Ryan Ward, a 2012 graduate, who works as a traveling nurse with his wife Jamie, also a nurse, when the COVID-19 pandemic began to intensify. The couple was on assignment at Hillcrest South in Tulsa, Oklahoma, when they heard of the dire need for nurses in New York City, one of the hardest-hit areas. They investigated the possibility of transferring and, within hours were hired. Hillcrest South graciously let them pause the term of their contract so they could head northeast.

“We had 36 hours to get out of town and get to NYC,” said Ward. “It was something we knew NYC needed and that would be good for us on many levels, [so] we made a decision that it was something we wanted to do, and in about 48 hours we were on our way.”

The couple landed in New York City and it wasn’t long before they were assigned to hospitals, each of them starting a 21-day odyssey of 12-hour days working on the “front lines” of the pandemic.

It became even more of a family affair when Ryan’s brother Colin, a 2015 ORU nursing graduate, joined the Wards in New York City not long after. Colin, also a traveling nurse who was on assignment in Sacramento, California, made his way to New York City after many conversations with his brother and sister-in-law about the need and opportunity.

As they’ve been working, all the Wards have been relying both on their expertise and their faith, a must for a high-stress environment that has more than its share of grief and helplessness.

“There’s a lot of death,” said Ryan. “A ‘code’ means someone is actively dying or is dead and you’re trying to revive them. In a normal hospital, you don’t hear any of those in a night. Three or four codes called would be a busy night in a [big] hospital. One of our first nights we had 33 codes called.”

Of course, the Wards aren’t the only ORU nursing alumni treating patients with COVID-19. In addition to the numerous graduates across the country, 2016 graduate Joshua Verner had started a six-week stint for Samaritan’s Purse in Cremona, Italy when the curve started to rise. 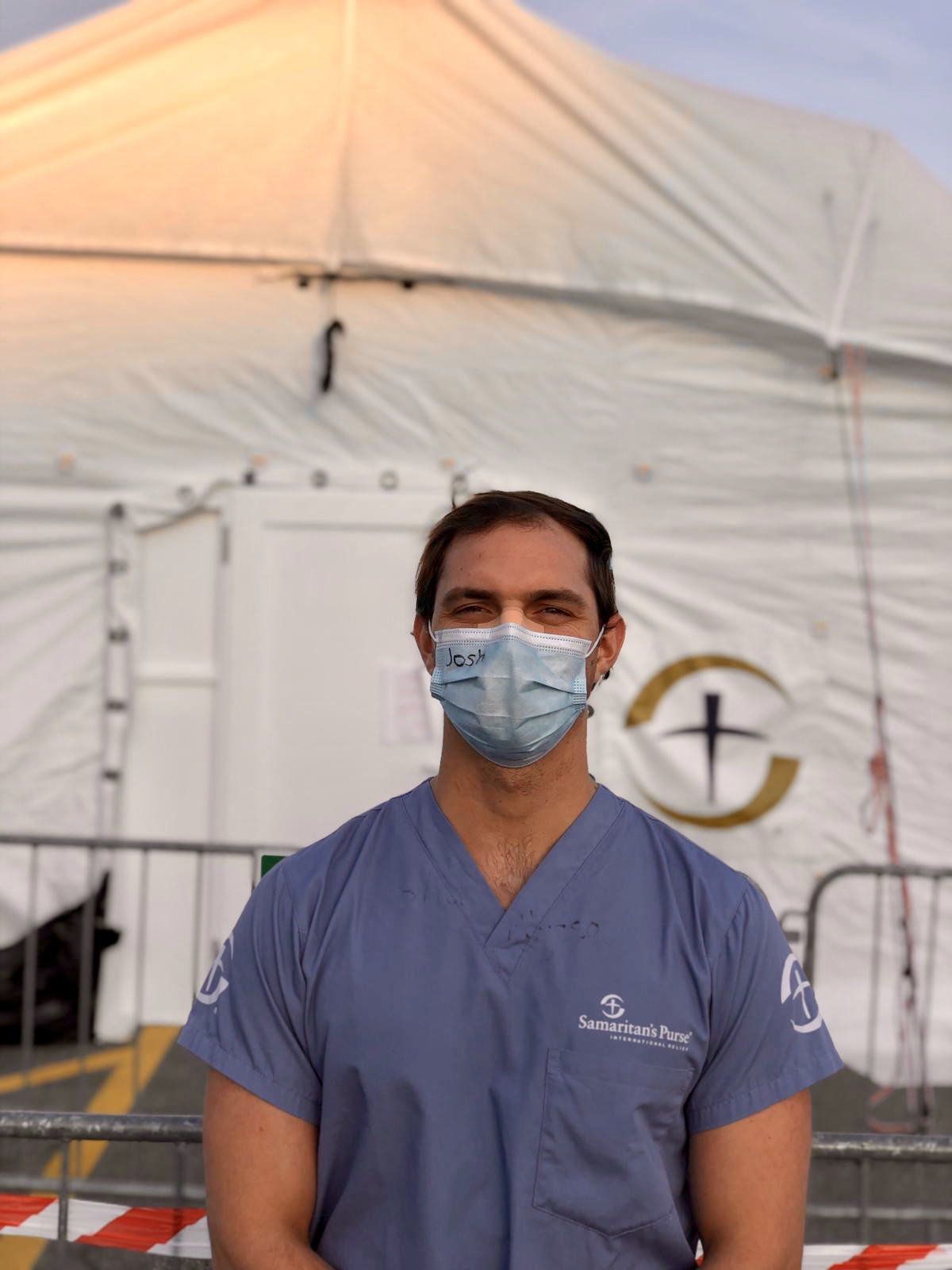 “There is a sense of helplessness that invades while fighting the coronavirus,” he said. “Having worked in ICUs for years, being surrounded by death is not a new experience for me, but I have taken care of patients every night for weeks, seeing some recover and get better and there is so much joy in that; all the while three feet away from them is another patient who I've been taking care of for weeks as well who had been given every treatment imaginable, who I've developed a bond with, pass away. This contrast between moments of joy and moments of loss can be difficult to handle and I'm grateful for God and the staff that I work with to be able to work through them.”

Understandably, Verner and his team have experienced highs and lows as they have battled COVID-19 in a small, tight-knit community.

“Here in Cremona, everyone has a close family member or relative that they know who has died because of the virus,” he said, “[but] God's grace is so evident here. Even in the times of greatest darkness and despair, there is such a peace and joy here among the staff that can only be from God. It's amazing to experience.”

All three of these experienced nurses credit the instruction they received at ORU with preparing them for the intensity of their experience.

“This career has an incredibly high rate of burnout, where nurses can’t keep doing what they’re doing because they’ve lost connection with why,” said Ryan. “I look at my vocation as my ministry, as my form of worship and my duty to God and not just my bank account. It’s prepared me for things like this, being able to continue to connect with patients.”

“In some of the harder-hit areas of NYC, it’s tough to retain that duty and responsibility to your patients,” Ryan continued, “and it’s tough to see that and know what’s happened with a lot of these nurses, doctors, and staff. It’s easy to lose your compassion and care and your overall perspective, but ORU trained me and has allowed me to stay connected to my patients as people, as spiritual beings who deserve more than just pushing meds and trying to keep them alive.”

“ORU prepared me in so many ways for what I am doing,” said Verner. “The nursing program is top-notch and has given me the tools I need to care for my patients here. They also trained us to treat the whole person—body, mind, and spirit—which I have the opportunity to do here and think is vital for patient care. Without that training at ORU, I don't think I would be able to effectively take care of my patients here.”

Verner also credits his time with ORU Missions and Outreach, training for and going on a short-term missions trip, with a portion of his success.

“It helped me be flexible, willing to serve in any capacity necessary, focus on the hearts of the people I am here to serve, and look for ministry opportunities everywhere,” said Verner, “and it gave me the courage, tools, and practice to share Jesus in any situation here. ORU's culture of going into every man's world, where the light is dim, and God's healing power is not known prepared me to be here, at the epicenter of a pandemic.”

All three nurses discussed how they were trained to provide excellent care, but that care extended beyond physical medical needs and often into the realm of the emotional and spiritual.

“I was able to pray with one of my patients two days ago,” Colin Ward said. “He’s just terrified, he has a tube down his throat, he was awake and coherent, and answering my questions, and crying through his ventilator. I just asked if I could pray with him, and he shook his head ‘Yes.’ We’re in the middle of a pandemic with people dying left and right, and I was able to take a time out and pray with him.”

A seemingly small moment, but a remarkable one.

“The ability to just have the thought process in my mind that I need to stop and pray, because no matter the outcome, this guy needs peace in his life right now. He’s in a terrifying situation, to know he’s positive for the virus, to be on a ventilator and know his chances of getting off it are slim to none—it’d be terrifying. The terror left his face because we prayed; he got just a little bit of peace for a couple of minutes.

“There aren’t a lot of nursing programs that preach the whole body. I don’t know what he’s going through spiritually, but just to have the opportunity to pray with him in one of the worst times of his life is very rewarding.”