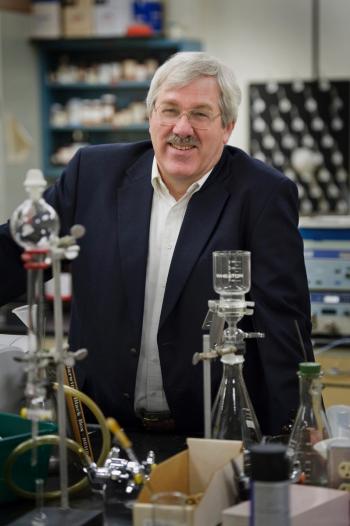 Dr. Collier is a man who loves God, loves Chemistry and loves people. That passion hangs on his office wall. His southern accent sends you to the midst of North Carolina where he grew up, but the photos that decorate his office wall send you much further--they immerse you in the heart of science among the world.

After finishing his Ph.D. at Oklahoma State University in Physical Chemistry and Molecular Spectroscopy and working six years at the US NIPER Department of Energy Lab managed by the IITRI, he began teaching chemistry at ORU. It was then that he took advantage of the summers to get involved in research and science education in countries far removed from his native land.

He was awarded a Fulbright Research Fellowship to Budapest, Hungary, in 1997, a Cooperative Studies Fellowship to the same during the 2005-2006 academic year, and a NSF-ROA award to North Carolina State University in 2001. While in Hungary, he was interviewed by the second largest paper in Hungary in a near page interview discussing the American intelligent design movement.

His research has focused on the vibrational spectroscopy of biologically interesting, and energy industry useful molecules.  He has created computational tools, (FCART06 and THERPOLY), that make it easier for the professional researcher to understand and interpret the infrared and Raman spectra of molecules and how to use them for their research problems. He co-founded and co-teaches the ORU honors program Philosophy of Science honors seminar and has an interest in the intersection of Christian and scientific philosophy.

Teaching English as second language is an additional interest. He has used it to help second language-English speaking science students improve their presentation and scientific writing skills. Dr. Collier has made four trips to the People’s Republic of China, where he presented molecular spectroscopy papers to Chinese Universities and assisted international students and faculty with their scientific English. "China in the 80's," he says," was not an easy place to live”, but much has changed since then.

He became a Christian at an early age in a Methodist church, in part because of the influence of the hymns he sang. He later became involved with the charismatic renewal.  He has studied Christian worldview and is fascinated with the interaction of science and faith.  Dr. Collier was able to work with churches in Kiev, Ukraine, at the time when Ukraine was breaking away from Russia. When not working he lives with his wife Susan, and their four kids, Jessica, Justin, Andrew, and Tiffany.  He participates in their many family activities, ranging from camping, Boy Scouts, fly-fishing, church life, and banjo playing.

Where his love of God and his passion for science collide, Dr. Collier asks, "Can you be a man of faith and a scientist?  I would say the two in the truest sense are the same. It is Christ in you the hope of glory. I have worked throughout world through the opportunities that science affords.” Dr. Collier says he wants students to come to ORU and get involved in science because they can do just that--make a difference and go places they would never believe possible. "Places that only science can take you", he says.