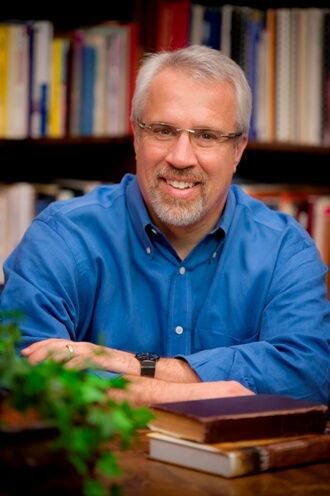 Dr. Bill Buker was born and raised in New England as a preacher’s kid - a fourth generation Pentecostal minister. His parents, Pentecostal pastors, pioneered churches in northern New England. Along with being heavily involved in sports and school activities, he also had a passion for playing the trumpet and was selected to the McDonalds All-American Band in 1976-77, which provided him with several once-in-a-lifetime opportunities, which included marching in the Macy’s Thanksgiving Day Parade and the Rose Bowl Parade, performing at Carnegie Hall in New York City, and taping for television at NBC studios in Pasadena.

Prior to joining the faculty at ORU, Dr. Buker was involved in pastoral ministry, serving in a variety of areas, including children, youth, Christian education, and pastoral care. He was also in full-time private practice as a licensed psychotherapist, and he continues to maintain a part-time practice specializing in marriage and family issues.

Coming to terms with his heritage of Pentecostal spirituality was a significant factor in his development process. As a result of this ongoing experience, he renewed his commitment to the Spirit-centered life and to helping others discover the power and freedom that can be found in living by the Spirit.  Most of the important events that shaped his life came in the form of personal challenges that required deep soul searching and significant change.  Spending ten years in pastoral ministry was especially influential in challenging him to wrestle with the dynamics of the divine-human interaction in the context of suffering.  As a result, he is passionate about being part of the redemptive process with clients and students who are seeking to create something of beauty and value out of situations that didn’t go as intended.

Dr. Buker first came to ORU in 1977 as a student, to play baseball.  He stayed on to earn a B. A. in Theological/Historical Studies., an M.Div. in Pastoral Studies; an M. A. in Counseling, and a Dr. of Ministry.  While a psychotherapist in fulltime practice in the Tulsa community, he was asked in 1994 to fill in for a professor at ORU who was taking a leave of absence.  He later became a fulltime adjunct instructor in the undergraduate department of Behavioral Science for five years.  He then accepted a position in the ORU Graduate School of Theology and Ministries as an Associate Professor of Counseling.  To be a “whole person” faculty member, he seeks to maintain balance in his life by regular exercise and healthy eating habits, nurturing himself spiritually, regular devotional and religious practices, and by stimulating his mind through regular reading and study habits.