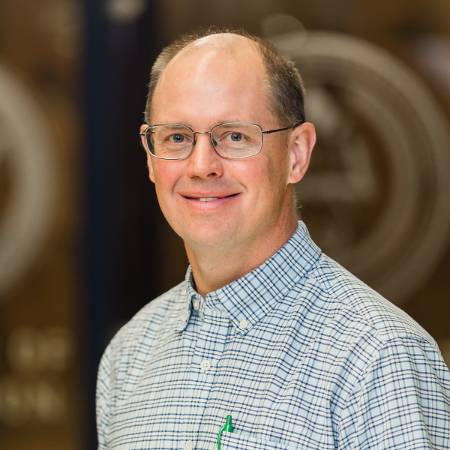 Dr. Michael Fulton joined the English and Modern Languages Department at ORU in the fall of 2013. During his career, he has taught a variety of courses, including basic and intermediate Spanish, and upper-division classes like Spanish for Business, Spanish for Medical Professions, Golden Age drama and Don Quixote. At ORU, he teaches primarily intermediate and advanced courses in Spanish language, culture, and literature.

Though he may have used different terminology, Dr. Fulton aspired to promote a whole person education with his students even before arriving at ORU. His desire has always been to engage in the “big conversations” with his students that would help them grow academically, professionally, and spiritually. He enjoys working with ORU students as they seek His  guidance for their lives. His goal is to further the university’s mission of helping students to identify and use their God-given talents for His glory.

In 2016, Dr. Fulton received a research stipend from the ORU President’s Research Fund.  The stipend funded a trip to an international historical conference the following year, hosted by the Arizona Center for Medieval and Renaissance Studies, a cooperative institute supported by Arizona’s three major universities.  At the conference, Dr. Fulton discussed how the invention of the printing press created unprecedented dilemmas for Biblical translators and commentators in Spain.  Fray Luis’ Inquisitorial trial (1572-76) demonstrates how much misunderstanding and debate often accompany institutional responses to technological innovations. A lengthier version of the conference presentation was accepted for publication in the proceedings of the conference, which is forthcoming from Brepols Publishers (Belgium).