Dean of the College of Science and Engineering 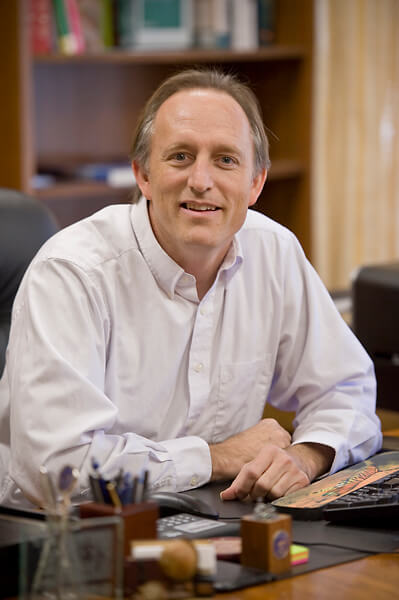 Kenneth Weed, whose field is physical analytical chemistry, enjoys cooking. He loves to experiment with different spices, and makes some pretty mean chocolate desserts. "A lot of chemists are chefs," Kenneth commented. "It's fun to try out different combinations and see what develops."

He also enjoys games and puzzles and regularly hosts large game parties that include everything from Cranium to Monopoly to role-playing games like Charades.

Both Kenneth and his wife Laura attended ORU. In fact, Laura was the R.A. on his sister wing. She was on the "Oh Well" wing; he on "Fortress." Today, they have three children.

Of all the things Dr. Weed loves about ORU, he especially appreciates the freedom to explore academic topics in a Christian environment. "We are worshiping God through the study of chemistry," he noted. I like what Oral Roberts said, "If science can prove that something is true, then that's they way God did it." Dr. Weed continued, "I like to learn new things and to see the dawning in students' faces as they grasp new concepts. It is so rewarding as an educator and a scientist."