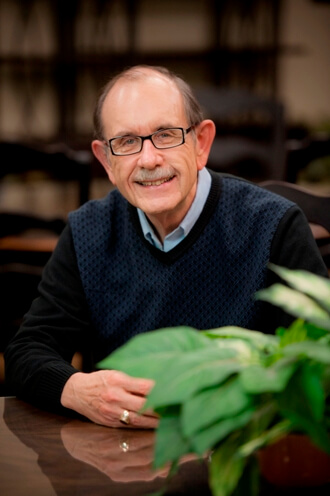 Dr. James Breckenridge joined the ORU Faculty in 1988, teaching courses in systematic theology, apologetics, and historical theology. He was attracted to ORU because of its diversity and openness to diverse perspectives and by its charismatic testimony.  He and his wife, Dr. Lillian Breckenridge, have taught in denominational colleges in North Dakota, North Carolina, and Texas.

The most formative influence of his childhood was the classical Pentecostalism in which he was raised, which formed him spiritually and created an intense desire to serve the Church.  As a child, he attended the Foursquare Church and was much affected by its revival atmosphere. This was complemented by the Church of God, which provided the denominational context for his development into adulthood.

While serving as a teacher, Dr. Breckenridge has also served as a pastor in the Church of God, Nazarene, Evangelical Free, and Independent church traditions. An especially valuable component in his personal and professional journey has been education within the Reformed, Lutheran, and Evangelical Free traditions. An especially formative influence was studying under the Christian apologist Francis Schaeffer.

The history of Christian thought is his passion, and he has taught courses relative to this area during each year of his teaching career. The core truths that have motivated Dr. Breckenridge in his professional goals for both research and teaching include: (1) the priority of faith over reason, (2) the complementary role of reason in relation to faith, and (3) the authority of Scripture as the norm for both.

The Holy Spirit has provided continuing opportunities for ministry and Christian service throughout his life.  “Many times opportunities for my wife and me have simply appeared,” he states.  “They have provided involvements that have been both providential and fulfilling - this is probably the greatest evidence for me that the Spirit is uniquely present.”  He believes that being a “whole person” faculty member implies balance in life and in outreach to society as a whole. This presents a continuing challenge to live Christianity in all of its ramifications.