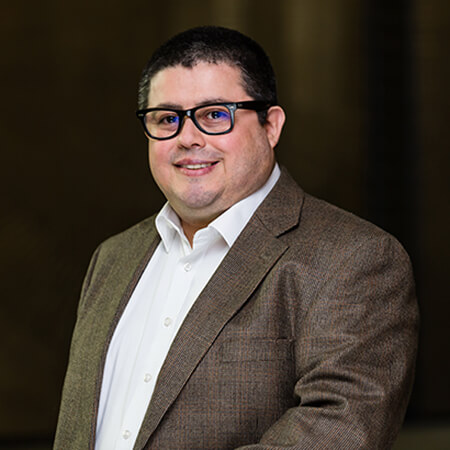 Dr. Enrique Valderrama obtained his B.Sc. in Physics from the Pontificia Universidad Catolica de Chile in 2004 and his Ph.D. in Experimental Plasma Physics from the same institution in 2009. While obtaining his Ph.D., Dr. Valderrama was involved in the construction and characterization of diagnostics for high-density pulsed plasmas and low-density radiofrequency plasmas. Capillary discharges and Plasmas Focus discharges were used to investigate the effect of high energy ions on different substrates. The spectrum of energy and ion flux was determined by a Time of Flight Technique. Silicon carbide and titanium carbide nano-structures were produced using the ions of these high-density plasmas. Several publications resulted from this work. His thesis work was on plasmas of radiofrequency, developing optical and electrical diagnostics to measure temperature and electron density.  He set up a PECVD apparatus to produce DLC films.  Power, pressure, flux and energy of the ions were investigated to produce thin and dense DLC. The formation of nano particles was studied in carbon plasmas excited by radiofrequency.  With plasma immersion ion implantation he produced DLC with nano-carbon particles embedded on the films. The morphology, structure and atomic composition of the resulting carbon films were characterized using SEM, EDX, AFM, XRD and Raman spectroscopy. He received his Ph.D. summa cum laude in November of 2009.  At Alameda Applied Sciences Corporation (AASC), Dr. Valderrama studied thin films of Nb, Nb3Sn, and Mo3Re, produced by a High Vacuum Cathodic Arc in a coaxial geometry in the presence of a low DC magnetic Field(CEDTM). Collaboration with Thomas Jefferson National Laboratory (JLab) permitted the study of the epitaxial growth of single crystal niobium films using a state-of-the-art metrology suite (SEM, XRD, EBSD). Dense films with nonmeasurable defects were grown on several crystal and amorphous substrates where superconducting properties of the films were correlated with the crystal structure. World record results of RRR (>600) on MgO (100) substrates have been achieved, reaching values comparable to those in bulk niobium. Several publications have resulted from this work, in Physical Review ST Accelerator and Beams, Journal of Applied of Physics, Superconducting Science and Technology, and several conferences. After a few years in the industry, Dr. Valderrama chose to move his focus to the academy and provide more quality time to his family, Henry 3 years old, and Lucia 1 year old. He became an assistant professor of Physics at Oral Roberts University. He taught many different classes including Physics 1, Physics 2, Calculus 1,2 and 3, Modern Physics, Electromagnetic Theory, Mathematical Methods of Physics, and Simulation of Plasma Physics.

After working 5 years on the academia, Dr. Valderrama, returned to the industry to assume the role of Director of Advanced Materials Department at Yes! Clean Energy LLC(YCELLC). Main responsibilities included the supervision of projects, business research, and design of advanced materials for the manufacture of profitable technology. In particular, acting as a program manager on the design, manufacturing, research and development of all-solid state thin-film batteries by an automated vacuum-cluster, design and prototyping of biosensors using a 3D conductive network made of graphene materials, and advisor for electroplating of lithium cobalt oxide for fast and thicker coatings. YCELLC company has several associated companies in China: Hong-Kong (marketing, sales), Shenzhen (research, marketing, sales) and Chengdu (manufacturing). To oversee and lead the projects was necessary to fly to China three times a year to evaluate progress and discuss how need to be done on the next phase, which include plasma source development and supervise the construction of an automated vacuum cluster. The latter project is a 1.6-million-dollar investment consisting of seven different high vacuum chambers connected all together by a highly precise vacuum robotic arm. This allows the multiprocessing of thin-films in a high vacuum to eliminate human and particle contamination. In each chamber, different processes are applied (mask alignment, pre-annealing, sputtering and post-annealing) to produce multilayer coatings for the fast prototyping of solid-state lithium batteries. A robotic arm inside of the vacuum cluster moves silicon wafers from one process to the next, all controlled by a proprietary software. At least two patents are being developed for this work. Also during this time Dr. Valderrama led a research group at the College of William and Mary to research advanced materials to optimize performance and characterize properties at the nano-level. This research was done with the vice-provost of research Dr. Dennis Manos, the former dean of the physics department Dr. William Cooke, a technical team, and several undergraduate students. At the College of William and Mary, just for material characterization, there is a more than ten million-dollar infrastructure, capable to characterize (on the micro and nano- level) the physical and chemical structure. During this time, two undergraduate students completed their thesis’ on projects associated with the company. After these 2 intense years on research and development, Dr. Valderrama decide to come back to the academia, and continue the research with students of plasmas and the interaction with materials. One of the projects, include particle in cell simulations for carbon vacuum cathodic arcs.