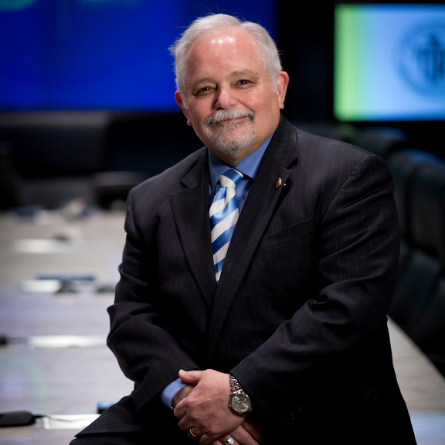 It was the mission of a Whole Person Education that inspired David Dyson to leave a full scholarship at a noted university in Houston to come to newly accredited ORU in 1971. He is one of the ORU Pioneers, earning a baccalaureate degree in 1973 and an MBA in 1978. Since graduation, he has served at ORU for forty-one years in various capacities including administration, faculty, and staff. He earned his doctoral degree from the University of Arkansas during a short leave of absence.

Technology has been a critical component of Dr. Dyson’s ORU journey. His first job on campus was Registrar, where he was a member of the team that installed the first online admission and registration system. As Dean of the College of Business, a position he held for nine years, he served as chair of the Online/World Wide Web Committee on campus. In this last stretch of the journey, as a tenured full professor in the College of Business, he has brought significant recognition to ORU through his teaching with technology. He was part of the ORU Team recognized with the Campus Impact Award from Campus Technology, The Private Institution Excellence Award presented by the Committee on Information Technology of the Oklahoma Regents for Higher Education, and in 2018 was recognized with the International Teaching Excellence award from the Accreditation Council for Business Schools and Programs, ACBSP, a business accrediting body who represents more than 10,000 members on 1,200 campuses in 30 countries.

Dr. Dyson has been known for service. At ORU he was the President of the Faculty Senate, Vice Chair of Tenured Faculty, and a contributing member on many committees. He has also served his profession as the President of a multi-state region of ACBSP, an accreditation Mentor and Site Team Assessor, the founding editor of Managing Articulation Issues and now serves on the Board of Commissioners. He has served his church in leadership positions for both missions and finance. He now continues in an adjunct capacity to facilitate the specialty accreditation for the ORU College of Business and as Faculty Emeritus teaching part-time.