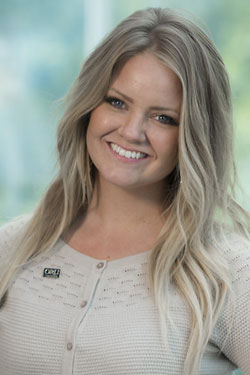 Cady (Kendall) Patterson graduated from ORU in 2012 with a degree in Pastoral Christian Ministries. As a student, she served on the music missions team of Team India and as an ATL on Team Philippines. She was also a ropes facilitator and Head Chaplain. She married her college sweetheart, Jordan Lewis, who also graduated from ORU in 2012. Together, they shared their journey of Jordan's battle with cancer in a blog, which is followed by over 100,000 viewers. Their story was widely followed and supported by the ORU community, who lovingly surrounded them in prayer and encouragement. Cady has served in administrative capacities for both small and mega churches and was the Volunteer Coordinator for The Little Lighthouse. She is a freelance writer, traveling speaker and blogger. She lives in Raleigh where she serves in children's ministry at King's Park International Church. She enjoys spending time with loved ones, mentoring young women and reaching out to recent young widows.