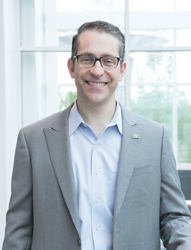 Bryan is a 1993 ORU graduate (Accounting). During his time at ORU, he was a member of the Accounting Honor Society, served as a wing chaplain and summer missions team member, and met his future wife, Holly (Smith 1993). He says that coming to ORU as a relatively new believer was “without a doubt one of the best decisions I’ve made in my life. It grounded me in my faith, taught me to stand on my own as a mature believer, and instilled character and values in me that I have relied on time and time again in my journey.” After graduation, he joined a local financial software company and grew through a variety of roles until the company was acquired by Intuit in 2001. Since then, he has held leadership roles in operations, supply chain, and product development, primarily in the fin-tech space. He and Holly currently reside in Boston. Over the years they have served the local church together in leading small groups, worship, Bible studies, youth ministry, and event planning.